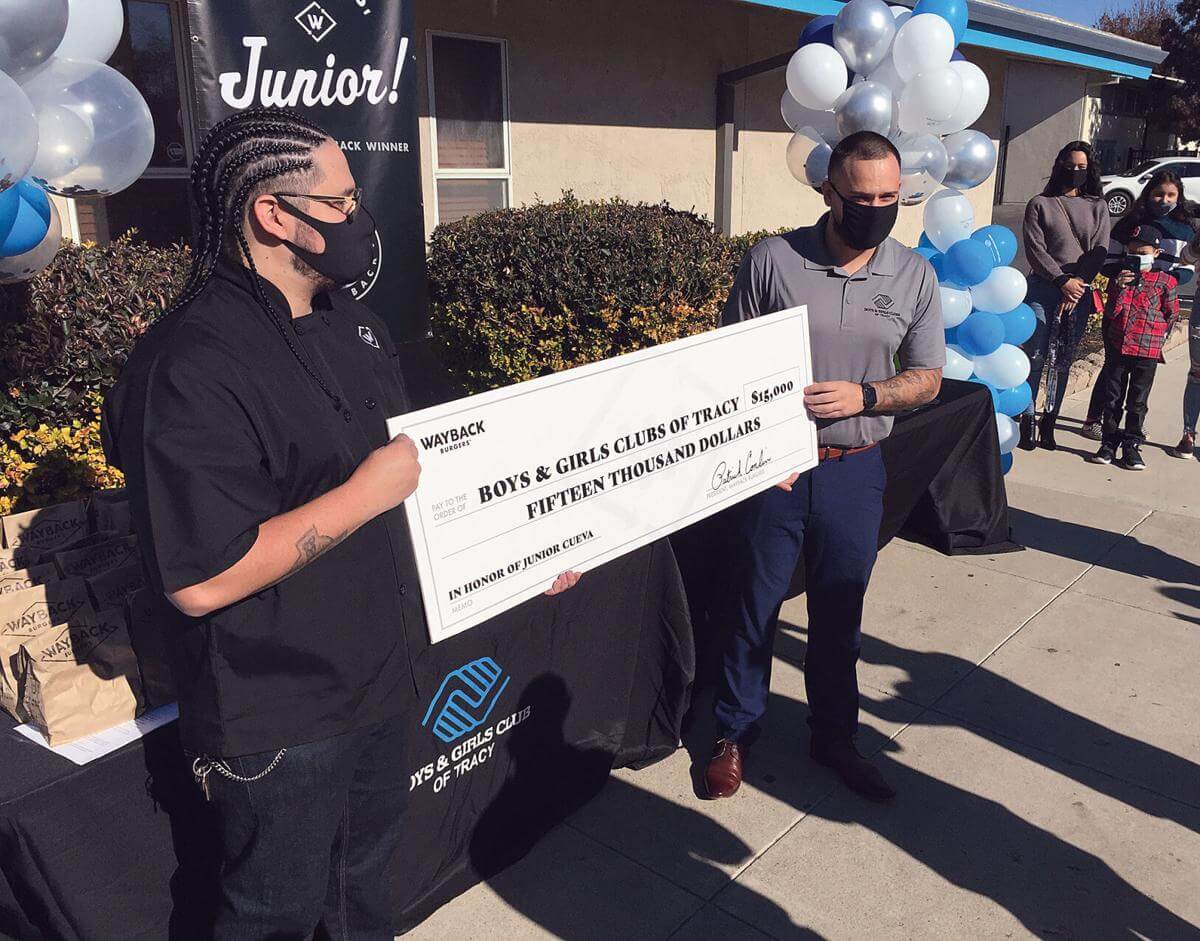 When Junior Cueva headed to the Tracy Boys and Girls Club on Tuesday he didn’t know what was in store for him. All his colleagues at the club would tell him was something about a check-passing and a photo-op.

It turned out that he was the top choice among 4,700 Boys and Girls Club professionals and volunteers nationwide who had been nominated for the Wayback Burgers “Wayback Gives Back Award.”

Awaiting him when he drove up on Tuesday was a $15,000 check from the national restaurant chain, which has a site in Tracy at 3218 W. Grant Line Rd., and restaurant general manager Zydrick De La Paz was on-hand to present the check to Cueva.

Though Wayback Burgers told local media outlets about the award two weeks ago, Tuesday’s presentation came as a surprise to Cueva as he drove up to the front of the Richard O. Hastie clubhouse to the sight of balloons, banners and cheering kids.

“I’m just honored. It’s not about me specifically, but everybody you guys see here,” Cueva told the crowd as he accepted the award. “I’m only able to do it because of everybody you see. It’s a team effort. I’m just glad you chose us.”

The donation, presented on “Giving Tuesday,” recognizes Cueva, 32, for his history with the club, starting as a teenage club member and staying with the organization ever since. For the past five years he has been the club’s director of operations, coordinating programs for the 800 kids that the local club serves.

Cueva has continued to prove his value to the club, and then when the COVID-19 pandemic hit he was instrumental in shaping the club’s response. That’s what impressed Wayback Burgers when they evaluated nominations for their award.

“We picked Junior because of his service throughout the entire quarantine, COVID, and the on-and-off of different state mandates,” De La Paz said. “He continued to drop everything, come here and help out.”

“This was all done by the higher-ups in Wayback corporate,” he said. “We’re exhilarated to be in partnership with the Tracy Boys and Girls Club. I’ve been trying to get into giving back to the community, because we’re nothing without our community.”

The $15,000 goes to the club, and Cueva said his goal now is to maximize the value of the donation. He figures his staff will find ways to make the best use of the money.

“We’re such a machine behind the scenes with so many more pieces. This is good for our whole organization to be recognized.”

Cueva said that right from the start the COVID-19 pandemic challenged him to figure out how the Boys and Girls Club could continue to serve youths during the quarantine. On Friday, March 13, the club was notified, just like all of the local schools, that it would have to shut its doors.

“Right away we started reaching out to all of our families,” Cueva said. “We serve 800 kids a day. That was the biggest thing, what happens to our kids now that the plug gets pulled. Our first thing was to do some wellness checks. Just make sure the kids had the supplies they needed: computers, food, printers. It went right through to virtual and not all of our families were prepared for it.”

He coordinated food giveaways, and saw to it that the club’s tutoring program could become a virtual classroom for all of the kids who would be stuck at home.

Cueva also recognized how important it would be to make a quick shift, from day-to-day in-person interactions with youths and their parents, to making phone calls, maximizing use of social media, and coordination with schools to stay involved in kids’ lives.

Club CEO Kelly Wilson, who nominated Cueva for the award, said he exemplifies the goal of the Boys and Girls Club.

“How he stands apart is that he stuck with it. He came as a kid because he needed it,” she said, noting that he was 14 years old and had just moved here with his family from the Bay Area when he joined the club.

Cueva said his family’s move from the East Bay uprooted him from his previous life. Two younger siblings had already discovered the club, so he decided to check it out for himself and soon discovered his new path.

“Me being a basketball junkie, that’s what drew me here,” he said. “They had a gym. Once I got in here they had an awesome staff. They allowed us to play basketball, they give you a little bit of homework help and every day I just kept coming back, to the point when I was here at 17, 18. They gave me my first job as a referee and I’ve been able, for the past 15, 16 years, to just keep going with the organization, to branch out and help more kids in our community.”

Since then he has also become the varsity basketball coach at Tracy High, and in 2018 he took the Bulldogs to their first league title since 1976.

Wilson said that Cueva is a natural leader and coach, which is what the club looks for in its staff.

“We took a chance and gave him the athletic director position because he loved basketball and being in the gym, and he just grew that program,” Wilson said. She added that he took on roles as unit director of the North School and Lowell Avenue site before he became director of operations for the overall club, about five years ago.

“He’s a lifelong learner, so he’s always trying to learn new things and make himself better and become a better leader,” she said. “He takes that same mentality of coaching with his team and the kids. He’s been there so he knows that they’re going through, so he relates so well to them.”