A redesign upgrades both the dining area and kitchen space.

Fast casual thrives by offering better-than-QSR-quality food at competitive price points. Communicating the quality of this food has been a key part of basically every successful fast-casual concept, from burrito joints to better-burger places to Mediterranean specialists.

In-store, this communication typically means showcasing cooking. By placing grills and flattops right up front, where guests can see, hear and smell the food as staff prepare orders, the concepts often receive extra credit for their food based on this transparency.

The dedication to display may be waning, though. Way more than a decade into the fast-casual boom, consumers may not need so much convincing. Instead, some fast-casual players now bet guests want an elevated dining experience, with quality signaled in more subtle ways than a sizzling grill.

One chain following this approach is Wayback Burgers. 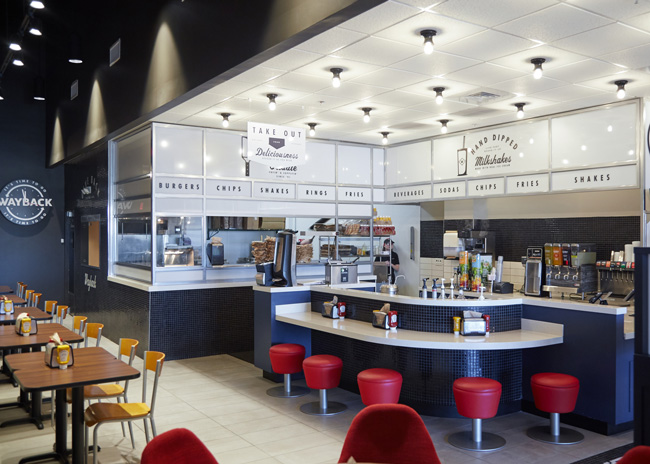 Founded in 1991, Wayback started out as Jake’s Hamburgers, a spot offering high-quality but straightforward burgers, fries and shakes. “It would be nice to call it a stand, but our origins are a roadside hamburger shack in Delaware. It really was a shack with the bathrooms out back,” says Patrick Conlin, president of Jake’s Franchising, Wayback’s
parent company.

Despite this humble start, Jake’s was so successful that it opened additional locations and started franchising. Due to trademark considerations, the company evolved into Jake’s Wayback Burgers, then, three years ago, simply Wayback Burgers.

This is a fitting name for the concept, says Conlin, given the chain strives to transport customers “to a time when things were simpler, when things were made correctly and there was a commitment to doing the right thing.”

At Wayback, this commitment translated into a front-of-the-house production kitchen. There, people could see staffers make burgers, along with chicken sandwiches, fries, hand-dipped milkshakes and more, all made to order.

Wayback thrived with this approach, with the concept boasting about 150 locations, primarily along the East Coast, at the beginning of 2020.

The display kitchen wasn’t perfect, though. The noise and smells of cooking can signal quality, but for some guests, these sensations take the in-store experience past energetic to chaotic. What’s more, with a front-of-the-house kitchen, table runners delivering food to guests would track grease throughout the dining area, resulting in cleaning and safety issues.

Wayback, then, introduced a new prototype about two years ago that moves the kitchen behind a wall but keeps it visible through glass windows and a pass-through.

“You can still see the guy preparing your food as you order it, but this helps with not having such a [strong] cooking smell in the restaurant, and we aren’t tracking the grease or oil throughout the dining room. It makes a nicer experience for the guests,” says Conlin.

To better display its cooking through glass windows and a pass-through, the chain split its hot equipment on opposite lines in its kitchen. The hood vents combine on their way out of the building.

The chain didn’t just stick a wall between its legacy kitchen and the dining room for the redesign. While the equipment remained the same, Wayback reworked the entire flow of food production.

In the old design, with the kitchen behind the POS station, the kitchen consisted of basically one long line. This was not the most efficient layout from a labor standpoint. The single-line design made it difficult for one staffer to work multiple stations.

In the new kitchen layout, Wayback employees can work more efficiently and with fewer steps. At the same time, the design showcases the most appealing parts of food production, says Patrick Reusch, the chain’s director of operations.

Wayback earned these benefits by splitting its production kitchen into two lines, with one facing the back wall and the other facing the dining area, in view of customers thanks to the pass-through and glass windows.

The customer-facing line starts with the flattop grill on top of a set of refrigerated drawers, which hold raw proteins. This station aligns with the entryway. As soon as guests enter the restaurant, they can watch the grill cook as he or she makes burgers, hot dogs and grilled chicken sandwiches.

“It was really important for us to have the grill facing the customers. That is part of the experience,” says Reusch.

Following the grill is the expo station, where staff plate or wrap and bag orders. Expo sits in the middle of the line, with all the work in the kitchen flowing to this point.

Next comes the sandwich prep station, followed by a toaster on a worktable. Shelving above the worktable holds buns for this station. When an order comes in, a staffer toasts the buns and adds toppings such as lettuce, condiments and cheese. These ingredients sit in cold wells up top, while backups for restocking are held in the refrigeration below.

The second line, facing the production kitchen’s back wall, starts with the chain’s fryers. These are a 180-degree turn away from the grill. Wayback uses two fryers: one for potato-based products (fries, tots and house-made chips), the other for breaded items like chicken strips, fried chicken breasts and macaroni and cheese bites.

This setup — the fryers and grill on opposite sides of a walkway — allows one worker to handle both stations. It also, however, complicates the kitchen’s hood system, says Reusch. Typically, all cooking equipment is on a single line, allowing for a single hood. In this case, Wayback has two separate hoods, one over each station. The ductwork for the two hoods, though, joins together overhead. As a result, the chain only needs one exhaust vent in the roof to expel air.

Past the fryers sits a lowboy refrigeration unit, which holds fries, onion rings and other fried goods prior to cooking. Sitting on top of that piece of refrigeration is a small warming unit for chili used for the chili-fied versions of cheeseburgers, cheese fries and hot dogs. This space also has heat lamps for fried items and bagged orders waiting for pickup. After that station sits a convection oven, where staffers melt the cheese for various types of cheese fries and related menu offerings.

At the end of this line sits a worktable, which holds extra buns below. A shelf above the table stores disposable goods, such as napkins and straws. On the table itself are extra heat lamps, which warm completed orders waiting for pickup.

With the sudden jump in online and third-party delivery, keeping to-go orders warm is, in fact, one of the biggest challenges Wayback’s operation has faced during the pandemic, says Reusch. The chain has had to “get creative” with its existing counter space in the kitchen, adding the heat lamps to maintain food
quality before pickup.

Wayback is also looking at heated, secured food lockers directly accessible by guests. This solution “would allow the guest to come and pick the food up on their own as opposed to having to come to the register,” Reusch says. “There’s nothing final yet. That’s just being explored.” 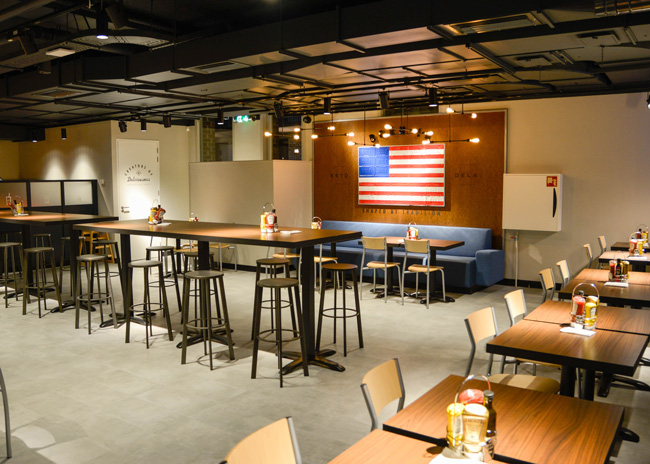 Wayback offers a variety of seating options, while touches of Americana are included in its design.

Wayback’s redesign wasn’t limited to its kitchen. The chain also overhauled the dining area. Just as the kitchen move sought to elevate the dine-in experience, so too did the front-of-the-house redesign.

Much of this is evident in the design’s finishes. Emulating the chain’s burger-shack roots, Wayback previously had red barnwood-style walls and dark floor tiles. These have been replaced with tan tile floors and a more sophisticated dark blue mini tile used in the entry, around the kitchen’s outer walls and in a band throughout the dining area.

Furnishings have been upgraded as well, with the chain replacing metal chairs and butcherblock-style tables with a variety of seating options. Guests now have their choice of upholstered banquettes, booths, floating tables and a community table.

While Wayback wanted to provide an elevated experience, it didn’t want a boring one. The chain adds a sense of playfulness to the space throughout the restaurant, such as the Wayback clock, set at five minutes before noon, with the second hand running backward.

A few elements of food production remain on display, adding some energy and theater to the space. These include the milkshake and beverage service, which occur behind a curved counter paired with red stools. “[Guests] can either sit there as they’re waiting for their order, or they can sit there and eat,” says Reusch. “They’re basically in the space where [Wayback team members] make the milkshakes and the sodas.”

The chain has taken some steps to enhance the theater of this space. With the chain’s emphasis on craft and authenticity, it uses hand-dipped French vanilla ice cream stored in a dipping cabinet with two slots. To complete the milkshake process, staffers rely on a shake maker and dispensers for flavorings and mix-ins. This station houses Wayback’s soda dispenser and a bubbler for iced teas, lemonades and other noncarbonated drinks.

The new design also includes a small retail section, where guests can find Wayback-branded T-shirts, hats, coffee mugs and other items. At less than 100 square feet, this space doesn’t have a big impact on seat count, but it does offer some distinct benefits, according to Conlin. “It’s an additional revenue stream, but more importantly, it’s a way to get the name out there on some cool items,” he says.

Better Experience and Better Days Ahead 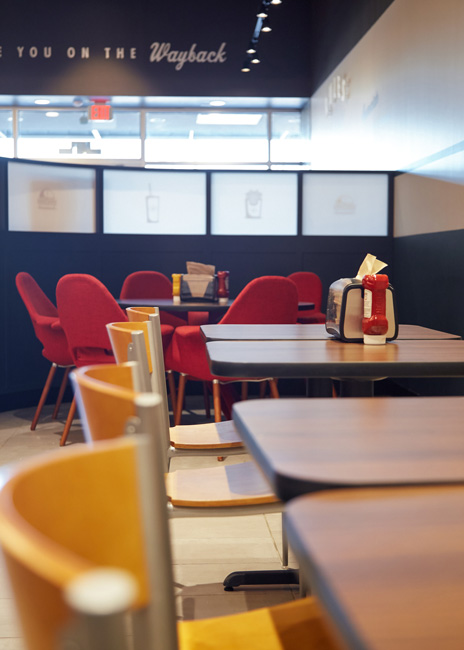 These days, of course, there aren’t as many people sitting at those stools — or in any of Wayback’s dine-in chairs. The pandemic has reduced the chain’s sit-down business notably, which in turn has impacted store counts and growth forecasts.

The company entered 2020 anticipating that it would open 8 to 10 new restaurants. Instead, it will only do about half that. At the same time, Conlin estimates that 5 to 10 of its existing stores have or will close permanently due to COVID-19-driven shutdowns and the subsequent economic hardships.

The chain’s growth story isn’t over, though. Since June, Wayback’s system-wide same-store sales have grown double digits thanks to takeout, online ordering and third-party delivery. Wayback has also signed more franchise agreements in 2020 than it did in 2019, and the chain anticipates growing its overall store count next year.

If early reviews from the franchisees who operate both legacy and existing restaurants are representative, investors will be happy with this change, says Conlin. “I went to visit [a franchisee with both types of locations] maybe three or four months after she opened up. I asked, ‘What’s your take? What do you miss about old design?’ She said, ‘Nothing. I’m positive I wouldn’t do the sales volume and attract the kind of guests that I’m attracting if I had the old design in this new location.’”