For many, summer triggers thoughts of swimming suits, picnics and vacations, but for fast casual restaurants, it signals refreshing limited-time offers.

Despite the pandemic, summer still triggers thoughts of swimming suits, picnics and vacations. For fast casual restaurants, however, summer signals refreshing limited-time offers. Chefs this year have thought of everything from fruity and cold brew drink concoctions to vegan-based lunches and desserts. See below for an industry round-up of summer menu offerings.

Robeks
Robeks Fresh Juices and Smoothies is introducing three limited-time superfood smoothies to get consumers ready for a healthy Summer. They include:

“Each of these Superfood smoothies also includes a boost of our proprietary multi-vitamin supplement, packing even more nutritional benefits,” Mitch Baker, VP of Marketing for Robeks, said in a company press release. “We’ve always been at the forefront of offering new, innovative products, and these new Smoothies add significant punch to our already popular Superfoods menu category.”

Robeks is based in Los Angeles and has about 100 locations.

Paris Baguette
In honor of summer, Paris Baguette has rolled out a variety of pastries, salads and an iced tea. Options include:

Paris Baguette operates more than 85 corporate and franchised locations in the U.S. and more than 3,500 internationally.

Noodles and Co.
Noodles and Co has debuted Perfect Bowls, which cater to popular diets and lifestyles, including paleo-friendly, keto, vegetarian and gluten-sensitive, according to a company press release.

Cousins Subs
Cousins Subs has created made-to-order chocolate and vanilla shakes as well as floats to its menu at a majority of locations.

“After testing these sweet treats in corporate stores throughout Wisconsin, and receiving overwhelmingly positive feedback, we’re thrilled to offer made-to-order Chocolate Shakes, Vanilla Shakes and Floats to our loyal guests at a majority of our 97 locations just in time for summer,” Justin McCoy VP of Marketing at Cousins Subs, said in a company press release.

The Vanilla Shake is made with vanilla gelato, while the Chocolate Shake contains vanilla gelato and two pumps of chocolate syrup. Both are topped with whipped cream.

Floats are made with any flavor soft drink, such as the Sprecher Root Beer, poured over creamy vanilla gelato. Cousins Subs is Local at Heart and incorporates locally sourced ingredients into its menu whenever possible. The vanilla gelato base for the shakes and floats, like all other dairy incorporated in Cousins Subs’ menu, is sourced locally in Wisconsin as part of the brand’s commitment to the Dairy Farmers of Wisconsin.

Starbucks
Starbucks has added two cold-coffee beverages as well as the Impossible Breakfast Sandwich to its summer menu.

Starbucks customers across the U.S. may also order the Impossible Breakfast Sandwich, which has Impossible Sausage, cage-free fried egg and aged cheddar cheese on ciabatta bread.

Fruitive
Fruitive is upgrading its menu of juices, which have been a staple since the first Fruitive location opened, with ProduceBlends.

“This is the healthier way to drink fruits and veggies,” Gregg Rozeboom, founder and CEO of Fruitive, said in a company press release. “Our ProduceBlends are a major upgrade to the juices that have been one of our specialties since 2011. But ProduceBlends are more efficient and more sustainable. They’re packed with 100% of the nutrition available from the ingredients we use, and because they use whole fruits and vegetables, there’s no waste.”

Juicing removes fiber and pulp, where many nutrients can be found, including some that support healthy tissue and a healthy immune system. Blended drinks retain the full nutrient value of their ingredients and produce no unnecessary waste, Rozeboom said.

“Blends are the future of liquid nutrition,” he said. “ProduceBlends are more efficient than cold-pressed juice and just as convenient for consumers. They’re a better value, too, and by eliminating the waste that results from the juicing process, blends are more earth-friendly and sustainable.”

Fruitive was founded in 2011 in Virginia Beach,

Luna Grill
As the latest evolution in its popular bowl line, Luna Grill has developed the Beyond Meat Coastal Med Bowl for all locations in California and Texas. Priced at $9.95, the bowl features Beyond Meat’s seasoned Beyond Beef, basmati rice, torshi, Greek cabbage, tomato and cucumber medley and pickled onions drizzled with tzatziki and Mediterranean Pesto, according to a company press release.

“Demand for plant-based meat continues to rise and the Coastal Med Bowl gives guests a better way to bowl — delicious, sustainable and nutritious,” said Morgan Rogers, director of marketing at Luna Grill. “Our goal as a company is to inspire good food choices, and this new bowl is a perfect complement to our existing Mediterranean offerings.”

The Coastal Med Bowl is Luna’s first bowl to feature Beyond Meat products and offers diners 24 grams of plant-based protein.

Founded in 2004, Luna Grill is based in California and has nearly 50 units.

The Dolly Llama
The Dolly Llama, a waffle concept that serves a version of Hong Kong’s Bubble Waffle to customers in Los Angeles, has partnered with Craig’s Vegan, based in LA, to offer several vegan-friendly desserts. Customers may select from four cashew milk-based ice cream flavors, order a vegan shake made with Craig’s ice cream and almond milk or take a pint of Craig’s to-go.

“The Dolly Llama was created to provide customers from all walks of life with an authentic, unique, and enjoyable dessert experience,” Co-Founder Eric Shomof said in a company press release. “We knew that in order to be truly inclusive, especially as a Los Angeles-based brand, we wanted to offer a selection of vegan dessert options to be accommodating towards all dietary preferences. We are thrilled to have found a like-minded partner in Craig’s, which offers vegan products that deliver the quality and taste that The Dolly Llama is known for.” 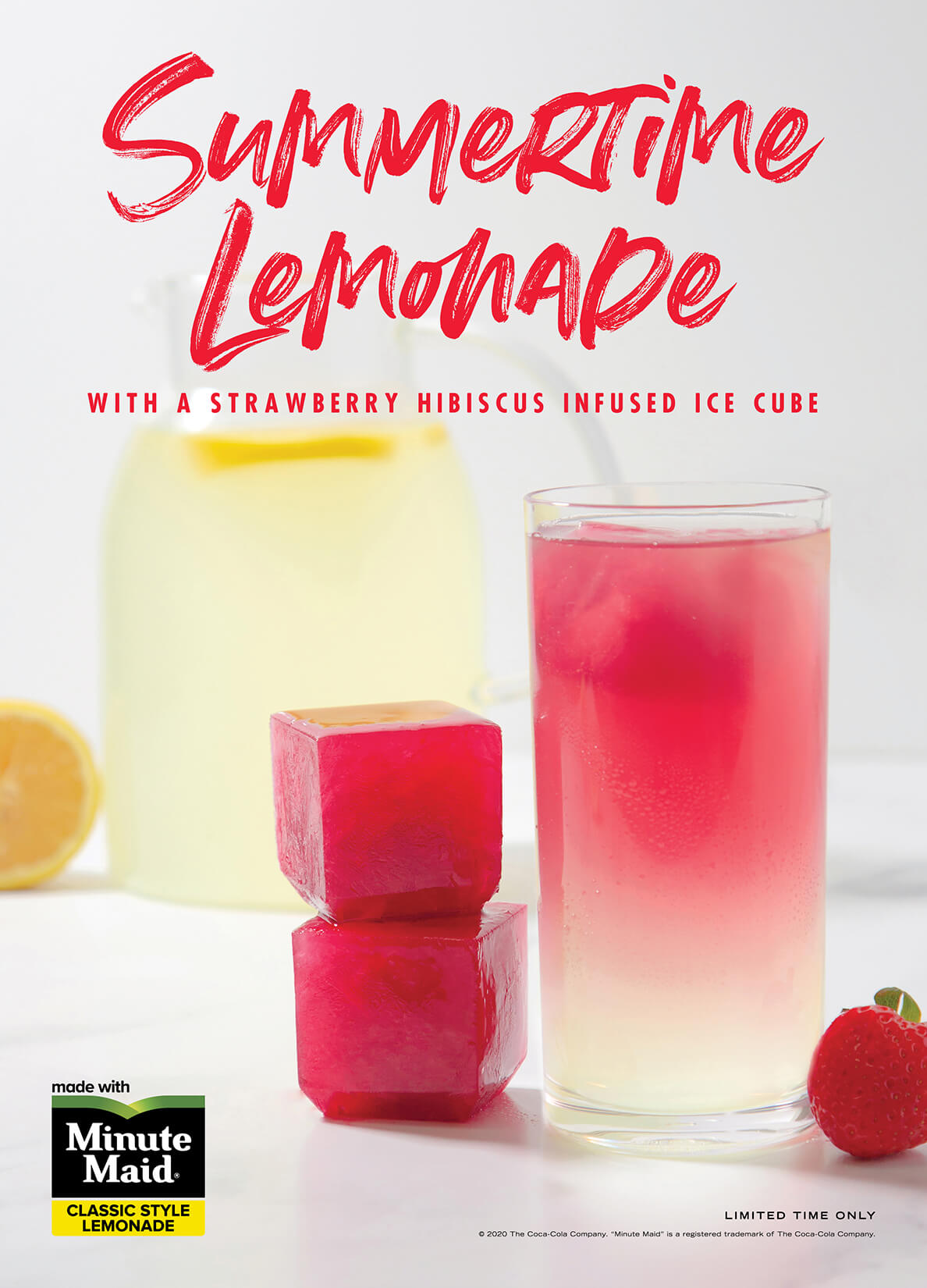 Wayback Burgers is welcoming summer by rolling out Summertime Lemonade — a limited-time beverage that combines Minute Maid Lemonade with a large strawberry hibiscus-infused ice cube made from BarrilitosAguas Frescas. As the ice cube melts, the drink turns pink and then a purplish color as the strawberry hibiscus flavor melts into the lemonade, according to a company press release.

Founded in 1991 in Newark, Delaware, Wayback Burgers operates in more than 30 states with over 166 locations nationally and internationally in Brunei, Sudan, Morocco, Saudi Arabia, Malaysia, Canada and the Netherlands.

“This Summer, The Coffee Bean and Tea Leaf® brand wants to offer guests a little respite and transport them to a favorite destination with our new cold beverages with refreshing flavors to help beat the heat,” Nurit Raich, senior director of product innovation, said in a company press release. “Our sweet and tropical new menu items are a perfect way to enjoy the Summer.”

The menu offerings are available through Aug. 25. They include:

The Coffee Bean and Tea Leaf has 1,145 retail locations across the globe and can also be found in grocery aisles as well as specialty locations, including airports and hotels.

With the Coconut Matcha menu items, guests get a naturally sweet treat that is high in antioxidants, improves brain function and is known to enhance weight loss, according to a company press release. The Watermelon Colada gives guests a way to stay hydrated and get a boost of Vitamins A and C.

The Coconut Matcha smoothie bowl and smoothie include coconut milk, banana slices, pineapple, matcha, coconut shavings, vanilla, dates and honey, and the lemonade is made with coconut, matcha and pineapple. The Watermelon Colada smoothie consists of coconut water, banana, watermelon, strawberry and honey blended together, and the smoothie bowl includes the same ingredients along with pineapple. The Watermelon Colada lemonade is a blend of watermelon and coconut.

“We always strive to bring vibrant, all-natural, sustainable, flavorful ingredients to Wow Wow’s loyal Ohana, and we are thrilled to add on these new menu items highlighting iconic summer fruits,” CEO Tim Weiderhoft, said in the release. “The Watermelon Colada and Coconut Matcha will enhance any summer day — whether it’s at the pool, beach, office or your backyard. These good-for-you flavors are bursting with summer in every sip.”

Wow Wow Hawaiian Lemonades was founded as a lemonade stand in Hawaii in 2012 and opened its first brick-and-mortar location in 2014 in Maui. It hit the mainland two years later, has been franchising since 2017 and now has six lemonade stands domestically and two internationally.

Jamba
Jama has brought back its Watermelon Breeze, made with a watermelon-grape juice blend, raspberry sherbet, strawberries and pineapples. Also returning is the Birthday Cake Smoothie but will only be on the menu until June 28. The plant-based treat features rainbow-colored sprinkles suspended in a blend of oatmilk, oatmilk frozen dessert, mangos, bananas and birthday cake flavored syrup, according to a company press release.

Each item on the Summer Seasonal Menu is made from scratch and can be modified to meet each guest’s specific dietary needs, according to a company press release. The menu includes:

For every Paleo Mango Salmon Tacos dish sold in the Dallas area, bellagreen will donate 50 cents to Texas Trees Foundation (TTF), whose mission is to beautify North Texas by planting trees and encouraging others to do the same. Since September 2018, the chain has raised $40,927 for its local non-profit partners, which will allow them to plant 20,000 tree seedlings in Houston and North Texas.

In addition to its new Summer Seasonal offerings, Bellagreen has taken the best sellers from its Houston menu and most popular seasonal items and added them to its Dallas menu. The updated menu will incorporate six gluten-free and vegetarian items, adding more options for guests with specific dietary preferences. These chef-driven favorites include:

Bellagreen, founded in 2008, has five locations in Houston and two in DFW.