Ever-Growing Methods of Mobility at IFE 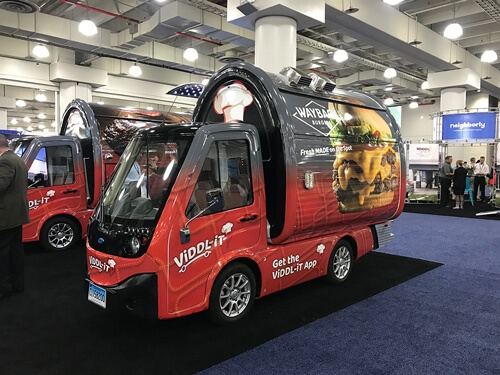 To say the American consumer craves convenience is becoming passé. Heck, between Netflix, Amazon and all the food delivery, it’s a wonder anyone leaves their house anymore.

And the new convenience economy and paths to it are still growing at a rapid rate, as three growing brands described during the 2019 International Franchise Expo in New York.

Wayback Burgers was showing off its new mobile burger truck, designed for small orders and to expand the territory for franchisees without paying the high fees for delivery services.

“We figured it’s got to be a better way for us to do delivery,” said Pat Conlin, president at Jake’s Franchising, the parent of Wayback Burger.

It looks like a food truck, but instead of the typical park and cook, the truck is designed around small and even single orders. Customers fire up an app called Viddle-It, make their order and the truck pulls up and starts cooking. Conlin said it can all be operated by a single person who drives and then cooks, but they’re also doing a little local marketing as they drive.

“I want to be driving around the radius around the restaurant. So it’s a two-fold purpose and acts as a mobile billboard,” said Conlin.

He said right after the show, the initial two trucks would hit the road at corporate locations for some final testing and to hone in on the best operations. The trucks, which would cost a franchisee about $35,000, are generating a lot of interest according to Conlin. One thing they’ll be testing is whether or not to charge a little premium for truck orders, but he said it wouldn’t be more than $5.

And maybe the best perk, by frying right at the curb, nobody gets soggy fries.

Tapping into the endless growth of the pet segment, Woofies is also on the road with its mobile pet spa. What started as a dog-walking business, quickly expanded around Virginia by adding van-based grooming services. The demographics cut a wide swath and include just about anyone with a passion for their pets and are willing to pay for the best care possible.

“We have a lot of elderly neighborhoods where we spend the whole day with their pets, walking them and grooming them,” said Woofies VP of Marketing Renee Ventrice. “And millennials are working long hours and they want their pets be well taken care of, and they have the disposable income because they don’t have children yet.”

And then there are the busy families that just don’t have time to get to the groomers.

Another perk is worker retention, because the van drives to the customer, there’s not the distraction of walk-ins or the need for extra staff to man the door.

“They have a private atmosphere for grooming. So there are much happier because they’re able to just do their jobs,” said Ventric. “You’re not answering phone, taking money and making their own schedules.”

And the Out Banks Boil Company has a new take on convenience, especially for people looking for some experiential vacation dining.

Founder and CEO Matt Khouri said the last thing someone with a fancy vacation home or rental wants to do is leave, it’s better to just enjoy that vacation.

“For us, its really about creating memories,” said Khouri. “Loading up the car with the kids and mom and dad, it’s difficult, then waiting in line for an hour and half and rack up a $200 bar bill while you wait—it’s a big process.”

He said customers can just fill out a form and relax.

“We come in the house we simplify the whole process and leave you fat and happy in a food coma on the couch,” said Khouri. “You can come watch the whole process. When it’s all done, we just roll up our table cloth and take that away too.”

He said the whole concept can operate out of 400 to 600 square feet of prep space. Basically, it’s a whole lot of cutting onions, potatoes and corncobs for the first half of the day, then a whole lot of fun the second half. The location also serves as a place to sell take-out boil pots pre-loaded with a full crab boil. Without a hood or much of anything but refrigeration, it’s a very low-cost concept from an investment perspective. But it is a lot of work for those summer months.

He said he’s thriving along the Atlantic coast where the two initial locations are operating with a lot of repeat business from routine vacationers who don’t want to leave their seaside paradise.