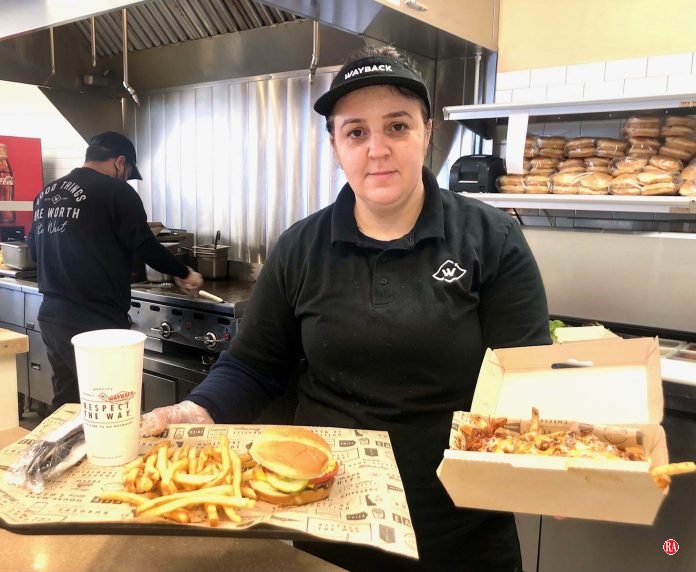 Wayback Burgers team member Laura Coma has been serving up fresh food at the Waterbury location for the past 10 years. (Steve Bigham Republican-American)

CHESHIRE — Locally based Wayback Burgers has announced a record-breaking year for sales in 2021 as more and more restaurants open across the country and the world.

The restaurant that bills itself as “America’s favorite hometown burger joint,” is now one of the nation’s fastest-growing burger franchises.

“We are very proud of the Wayback Burgers brand for having a successful 2021,” Conlin said. “We can’t thank our franchisees and guests enough for supporting the brand this past year.”

On a recent afternoon, hungry customers flocked to the Waterbury Wayback on West Main Street, one of the busiest stores in the country.

“I like their old-fashion style burgers,” said Waterbury resident Nancy Eltman. “They taste like the burgers I remember from the old days.”

Regan Lance of Watertown said he often stops in after swim practice.

“It’s good; it’s fresh; it comes out quick; and I love the strawberry shakes,” he said.

Wayback Burgers is expecting another strong year in 2022 as it rolls out new limited-time-only items, as well as 15 to 20 restaurant openings across the U.S. and internationally, including Japan’s first Wayback Burgers, opening in February.

Wayback Burgers can also be found in faraway places including Brunei, Morocco, Saudi Arabia, Malaysia, Pakistan, The Netherlands, Canada and Ireland with other countries soon to be added to the list.

Laura Coma has worked at the Waterbury location for the past decade and says the company has always treated its employees well. She says she takes pride in knowing that her store is the second-busiest Wayback in the country.

Coma said the hottest-selling items are the cheesy and double-bacon burgers.

“Those are the favorites, but everything we sell is good. Nothing is frozen. Everything is fresh. The salads, the meat, the chicken. All fresh. We take a lot of pride in being the very best at what we do,” Coma said.

Conlin said Wayback team members like Coma bring a passion every day to serve up only the best burgers, shakes and fries.

“The loyalty of our guests throughout the last two years is especially welcome considering the pandemic. Without their support and love for our food we could never have achieved the success that we have,” he said.